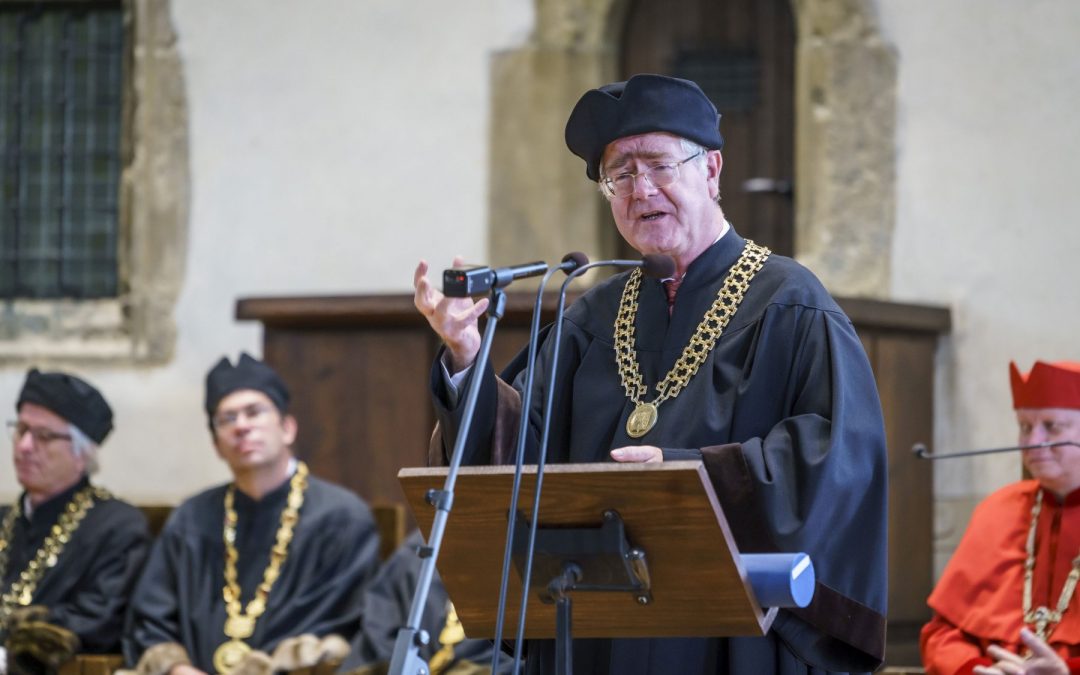 A member of the Scientific Council of the Centre of Advanced Applied Sciences (CAAS), Prof. Wolfgang Peter Schleich from the University of Ulm, Germany, was awarded an honorary doctorate (Dr. h. c.) of the Czech Technical University in Prague (CTU) at a ceremony of the Scientific Council on 5 October 2021 in Bethlehem Chapel. He was nominated by the Faculty of Nuclear and Physical Engineering of the CTU in Prague (FJFI) and awarded the doctorate was awarded by Prof. Igor Jex, Dean of FJFI and Director of CAAS. Together with Prof. Schleich, Prof. Stephen Mark Barnett also received his doctorate.

The honorary doctorate for Prof. Wolfgang Peter Schleich is also in recognition of his scientific work and original research results in quantum physics on a global scale. At the same time, it is an expression of recognition and appreciation of his personal contributions to international scientific cooperation with CTU over the past 25 years. The first significant collaboration between Prof. Schleich and Prof. Jex’s group was Igor Jex’s stay in Ulm as part of a Junior Humboldt Fellowship, which was followed by repeated shorter or longer stays. This collaboration resulted not only in scientific publications but also in the initiation of further collaborations and the development of other topics. Examples include the collaboration with Prof. Gemot Alber from the Technical University of Darmstadt, Germany, or the experimental group of Prof. Christine Silberhorn from the University of Paderborn, Germany. These collaborations also lead to the exchange of students and researchers and a number of interesting scientific publications. Prof. Schleich has also been a member of the scientific board of the Doppler Institute at the FJFI for many years and has contributed to the direction of this institution with his advice. Since 2019, he is also a member of the scientific board of the CAAS project, which is one of the largest funded projects at CTU.

You can see photos from the honorary doctorate ceremony in Bethlehem Chapel.