Nanoscale frictional properties of ordered and disordered MoS2
Elisabetta Serpini; Alberto Rota; Sergio Valeri; Egor Ukraintsev; Bohuslav Rezek; Tomas Polcar; Paolo Nicolini
Tribology International; Volume 136, August 2019
The present work aims to understand the sliding of ordered/disordered molybdenum disulfide against itself by combination of nanoscale sliding experiments and atomistic simulations. Tribological experiments were performed using lateral force microscopy with tips covered by a thin sputtered MoS2film. Nanoscale contact area between the MoS2-coated tips and MoS2 samples opened up the possibility for close comparison with classical molecular dynamics simulations. Our simulations replicated well the coefficient of friction obtained by experiments for various contact conditions and shed light on nanoscale sliding of both crystalline and amorphous MoS2. Experimental sliding at humid environment demonstrated detrimental effect of water molecules on friction. However, such effect was much less pronounced when compared to that observed in macroscopic sliding experiments.

Increasing Fatigue Endurance of Hydroxyapatite and Rutile Plasma Sprayed Biocomponents by Controlling Deposition In-Flight Properties
J. Cizek; O. Kovarik; F. Siska; J. Bensch; J. Cupera; M. Matejkova; J. Siegl; T. Chraska; K. A. Khor
ACS Biomater. Sci. Eng. 2019, 5, 4, 1703-1714, Publication Date: March 12, 2019
Three sets of hydroxyapatite and rutile-TiO2 coatings were plasma sprayed onto metallic substrates. The spray parameters of the sets were modified so as to obtain different in-flight temperatures and velocities of the powder particles within the plasma jet (ranging from 1778 to 2385 K and 128 to 199 m s–1, respectively). Fatigue endurance of the coated specimens was then tested. The samples were subjected to a symmetric cyclical bend loading, and the crack propagation was monitored until it reached a predefined cross-section damage. The influence of the coating deposition was evaluated with respect to a noncoated reference set and the in-flight characteristics. Attributed to favorable residual stress development in the sprayed samples, it was found that the deposition of the coatings generally led to a prolongation of the fatigue lives. The highest lifetime increase (up to 46% as compared to the noncoated set) was recorded for the coatings deposited under high in-flight temperature and velocity. Importantly, this was achieved without significantly compromising the microstructure or phase composition of the deposited HA and TiO2 layers.

Microstructural evolution of helium-irradiated 6H–SiC subjected to different irradiation conditions and annealing temperatures: A multiple characterization study
N. Daghbouj; LiB. S.; M. Callisti; H. S. Sen; M. Karlik; T. Polcar
Acta Materialia; Volume 181, December 2019
The microstructural phenomena occurring in 6H–SiC subjected to different irradiation conditions and annealing temperatures were investigated to assess the suitability of 6H–SiC as a structural material for nuclear applications. To this aim, a single crystal of 6H–SiC was subjected to He<sup>+</sup> irradiation at 300 keV with different fluences and at temperatures ranging from 25 to 750 °C. Rutherford backscattering/channeling (RBS/C), X-ray diffraction (XRD) and transmission electron microscopy (TEM) analyses were combined to shed light on the microstructural changes induced by irradiation and subsequent annealing (750 to 1500 °C). At room temperature, amorphization starts to occur at a fluence of 2.5 × 1016 cm−2 (0.66 dpa). On the contrary, amorphization was prevented at high irradiation temperatures and fluences. Furthermore, a thin and highly strained region located around the maximum He concentration (Rp) formed. This region results from the accumulation of interstitial atoms which are driven toward the highly damaged region under the actions of a strain gradient and high temperature. Regardless of the fluence and irradiation temperature, the material stores elastic energy, which leads to the trapping of He in dissimilar defect geometries. For irradiation temperatures below 750 °C, helium was accumulated in bubbles which coarsened after annealing. On the other hand, for an irradiation temperature of 750 °C, helium was trapped in platelets (even for medium fluence), which evolved into a homogeneous dense array of cavities during annealing. DFT calculations show that the bubbles are under high pressure and contribute to developing the overall tensile strain in the single crystal 6H–SiC. 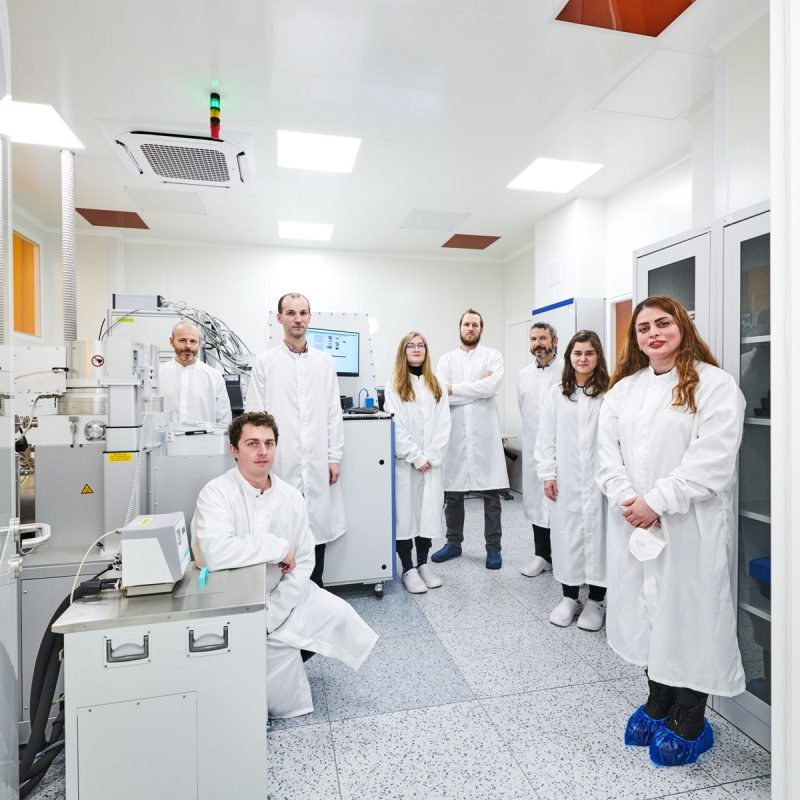